This use case demonstrates the compensation of cardiac motion in a 3D time series acquired with an MR scanner. The reconstructed single 3D images were reconstructed at specific phases of the cardiac cycle using cardiac gating.

Please see our page on Image Registration for more details regarding the component.

The images show the same coronal slice through the 3D MR image with the original time series on the left side and the time series after correcting cardiac motion using our Image Registration on the right. 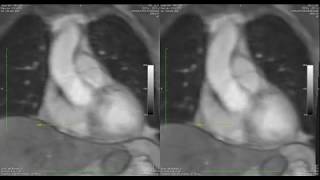 In the example shown, a specific anatomical landmark is marked with an arrow to illustrate movement through the cardiac cycle.

For certain applications, such as perfusion measurements within the anatomy of the heart, it is desirable to "freeze" the cardiac motion to a specific point within the cardiac cycle without altering the image intensities in a way that compromises the measurements.

This is accomplished in the example shown by compensating for the cardiac motion by applying our nonrigid Image Registration. It can be seem from the resampled time series on the right side that the landmark arrow now consistently stays at the desired anatomical position throughout the series.